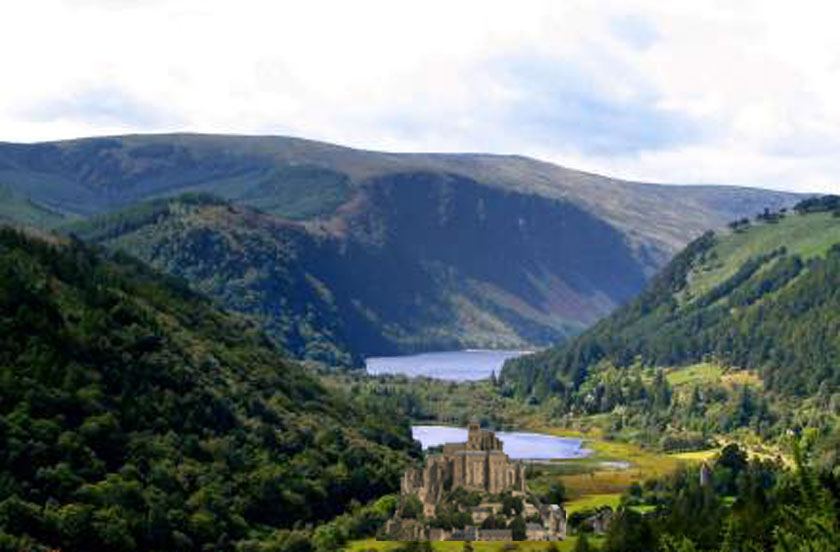 Terraset: As far as can be perceived, Terraset was the name of the continent or possibly the world/planet upon which these events occurred.

Tycosa: Tycosa possibly perceived to have meant peace/tranquility or paradise, was an immense valley region surrounded by mountain ranges, it was often covered by a thin hazy cloud cover, the clouds often provided cool temperatures and a relaxing atmosphere, although usually cloudy the sun moon and stars where usually still visible through patches in the night sky, the sunrise, and sunsets were often spectacular, the sky ablaze in red and purple clouds, casting golden light upon the flourishing green landscape below.

The valley had large patches of forests scattered throughout the landscape, a network of rivers waterfalls and lakes existed, fed by the surrounding mountains runoff, vast grassy plains bridged and separated the patches of forests throughout the valley, and a small ruined city known as Cycanthra existed around a grand crumbling tower structure near the center of the region.

The temperature of the valley was usually cool, and breezy wind was quite common, the winters were cold and would freeze the region in a blanket of ice and snow, the Spring was enjoyable, and the summers were humid and warm. The Tycosian valley was home to an assortment of many different creatures, primarily mammels, most of which were grazing animals, within the forests lived tribes of evolved canines with humanoid stature, they were the descendants of refugee's from the ruined culture mentioned above, they spoke a verbal language and had a primitive written language as well.

Lastly, at one point in prior history the Tycosian Valley region was once the hunting ground for two clans of dragons known to the Tycosians as the Calako clan (Fire) which lived one the western end, and Tyfone Clan (wind) which inhabited the eastern end of the region, both clans inevitably collapsed, separated, and migrated due to over population and famine, Korageth and his follow dragons were the three remaining descendants of the two groups.

Arconia: Arconia short for Araconis was the name given by the Tycosians to the land outside the Tycosian valley. It was an expanding kingdom consisting mostly of humanoid beings and some "mystics" the people of this land were always looking for new lands to conquer and claim.

The general landscape of this region was very different from the fertile valley, Araconis was a mountainous desert region at a lower elevation of the Tycosian Valley, the western regions ended at an unexplored expanse of ocean, the eastern regions of Araconis ended at a large mountain range behind which were other lands unknown/irrelevant to the arconians and unexplored by Korageth or his friends.

Lands and Places of Tycosa:

Mt. Tyfone: On the Eastern edge of the valley was the Mountain of Tyfone named for the fact that the winds were extremely intense in this area. The area around Mt Tyfone created a wind tunnel for the currents blowing towards it. Despite the wind currents around the mountain, dragons once lived near the base of the mountain inside a collection of hollow crevices and that is were the dragon known as Veltra resided during Korageth's lifetime.

Mt. Calakos: Near the Western edge of the valley surrounded by Forest was a steep occasionally craggy mountain it's many cliffs and crevices housed many small caverns and nooks, it is in this location the Korageth's ancestors once resided and hunted, it is also were the wolfen Justra discovered Kora's egg.

The Lycona Forest: This was the largest forest in Tycosa, likely accounting for 58 percent of the valley it is where the Tycosians fled to. It was easy to get lost in these forests and could take days to escape the maze of streams, meadows, and recurring trees and brush. Cutting through the center of the Lycona forest, fed from the runoff of the Sycala mountains, the river Terresa broke into a series of waterfalls and these were referred to as the great falls of the lycona forest.

The Terresa river: The largest river of Tycosa fed by the great falls it's source comes from the Sycala mountains near Mt. Calakos. The Terresa river fed many streams throughout the Lycona woods and accumulated in Kelona lake near the Rikanu plains near the ruins of Cycanthra.

The Sycala Mountain Range: All the Mountains surrounding the valley of Tycosa were known as the Sycala Mountains. They were windy, rocky and very treacherous they provided a natural defense from invaders from outside of the Tycosian valley. The only flaw was a cave system which tunneled from the base of one of the mountains, traversing this tunnel would apparently release the traveler at the summit of one of the mountains within the valley, voiding the deadly climb which would otherwise be required.

The Rykanu Plains: The Valley was for the most part forested but outside the forests was a patchwork of grasslands and fields which is where the grand tower and ruins of Cycanthra were located, as well as Kelona lake..

The Kelona lake: The Water from the mountains and rivers of the forests all met near the grasslands of Rykanu and formed a very large lake which was the primary water source for the grazing creatures of the valley.

The City of Cycanthra: The city of Cycanthra was a primitive city complex surrounding a ruined tower. It was deserted after a battle a century prior to Korageth's birth, prior it's destruction and desertion the Tycosian people of Cycanthra thrived off of hunting parties, a farm system, the water of lake Kelona and a complex system of barter, the did of a primitive form of money in the way of rare stones and gems, but trade of goods ans services were the primary system.

They quarried stones from a canyon some short hours away. They were a peaceful people living as a collective, isolated from the outside world and governed by the separate heads of ten royal bloodlines who dictated law and judgement from a democratic round table.

The city was discovered by humanoid explorers from outside the valley, they were welcomed as honored guests, in time, the ruler of the explorers homeland sent armies to take Cycanthra, a month long siege took place the citizens fled,, a battle ensued with the governing council and it's allies against the invaders, the Tycosian elite won against the invaders at immense sacrifice but in vain. The refugee's of Cycanthra declared the city's remains cursed and became tribal within the forests. Thus the city, it's tower, and culture fell to ruin.

The Grand Tower: Once the heart of the Tycosian Valley, in the center of the Rykanu grasslands north of Kelona lake, surrounded by the ruins of Cycanthra was a large structure similar to that of a small modern skyscraper on Earth. It was wide and built of stone, it consisted of six floors and was surrounded by an outer wall which separated the tower from the city. Within the outer wall was a courtyard or garden and a stream cut through the bottom of one of the courtyard walls and entered a small pond before exiting under the outer wall on the other side. The tower is where the Tycosian grand council of ten once ruled the valley before their culture and civilization collapsed.

The entrance of the tower was a thick wooden doorway built in an arched style, within was a large lobby, in the center of this lobby was a staircase leading to an upper floor, left of this staircase was a large dining area, a long table built of stone resided in a slender well lit room, connected to this room was a room with ornate fire pits and primitive carved structures well designed for preparation of food and storage. As well on the right side of the staircase on the first floor lobby was a large vacant room with moss ridden murals upon the walls and extensive damage from the past war, it is perceived that it was once a ballroom of sorts.

Beneath the grand stair case of the lobby was a doorway leading into a primitive cellar or underground room, within it was barrels of stored liquids perceived wines, and grains. Climbing the grand staircase to the second floor, one would find a series of six rooms with furnishings and another diagonal staircase leading to the third level, within the third floor was a large vacant room in which the dragon Korageth slept and resided, un-repaired damage to the walls allowed for him to exit and return to this room at leisure.

Across from this room on the third floor was what was perceived to have been a library of sorts, clay tablets with primitive text were stacked horizontally across stone carved shelves. The layout of the fourth and fifth floors were never known to Korageth, his body was too large to access them, but he was told by Justra that upon the sixth floor is were the grand council once ruled from an elaborately carved room.

Justra, the wolfen who had discovered Korageth's egg was a descendant of Rykuda a member of the council of ten, because of this heritage, he searched out and discovered the abandoned ruins with the goal of rebuilding them, he resided within the tower remains with Korageth for some years until their deaths at a trespassers ambush.

The Dragon's: Dragon's were once abundant, in the area of Tycosa and Araconis, Unfortunately they migrated away from the Tycosa/Arconia region due to overpopulation and food shortage, Neither Korageth or the Tycosian knew were they went and only few wandering lone dragons remained. The dragon's of Terraset were said to have came in many color's, types, and personalities, some wise and noble, others power hungry brutes. For more information on the dragons of Terraset read about the Tycosian dragons.

Supplementary Story Content: This contains a little extra information concerning the world portrayed within the above stories, it covers topics regarding my dragons and characters, the Tycosian Language, various landmarks and general information of that variety.
This article has been read 76 times. | This article hasn’t been rated yet | 0.